The need for a coordinated response  approach in the event of a cyanide spill in Guyana was underscored when Aurora Gold Mine (AGM) hosted an emergency response seminar on Wednesday. The seminar, which brought together representatives from government and non-government organizations such as the Guyana Police Force, Civil Defense Commission (CDC), the Guyana Fire Service and the Woodlands Hospital, was facilitated by Cyanco’s Director of Environment, Health, Safety and Security, Max Jones and Roy Norcross, Cyanco’s Director of Applied Technology.

Cyanco produces liquid sodium cyanide, which is used to extract gold from ore, but this chemical must be used safely and reliability. AGM is among one of the mining companies that Cyanco supplies with sodium. 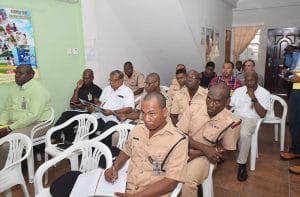 The Emergency Response seminar in session

During the initial stage of the seminar, Jones explained in depth the Incident Command System, which was developed in the United States. It is a standardised, on-scene incident management concept that is designed to allow responders to adopt an integrated organizational structure equal to the complexity and demands of any single incident or multiple incidents without being hindered by jurisdictional boundaries. After his presentation on the Incident Command System, Jones engaged the representatives, including CDC Director General, Colonel (ret’d) Chabilall Ramsarup and Divisional Commander in Charge of Operations at the Guyana Fire Service,Compton Sparman,on an emergency response exercise.

While conducting this exercise, it was realised that there is no standard operating procedure to follow in response to a cyanide spill or an accident involving cyanide. Jones said there is an obvious need for “pre-planning”. “Pre-planning will allow local groups to develop the system that will be used if an incident happens, how we react and how we protect the public, how we protect the environment and how we recover so there are no further impacts,” he said.

AGM Health Safety and Environment Officer Clyde Gillespie told Guyana Chronicle that the seminar was very informative, noting that the mining company now has a better understanding of the way in which the communication should flow in the event of an accident involving cyanide.
Gillespie said AGM has safety mechanisms in place to guard against cyanide spills, noting that the company has learned from the mistakes made by Omai, the mining company responsible for the August 1995 cyanide spill in the Essequibo River.

“We have learned from the past, so what we do at AGM at the end of the process where we utilize the cyanide to extract the gold, we have two very large tanks and in those tanks we add chemicals that detoxify the cyanide, destroying the cyanide before it goes out to the tail end facility.”
Additionally, there are established Standard Operating Procedures (SOPs) in the event of a cyanide spill.

Sparman, who is knowledgeable in the area of cyanide and cyanide spills, said there is need for a national coordinated response system to be in place.
“This session is very important and we need to have more coordination on this as to who have the lead role or responsibility whenever you are dealing with this kind of spill,” he said.

Based on the discussions during the seminar, it was agreed that there is need for another forum involving a wider scope of stakeholders. It was recommended too that the next seminar be conducted on site and allow for greater understanding of what needs to be done in the event of an accident.

The number of OSHA violations, injuries and fatalities by electrocution clearly shows us that electricity is a major…

Five-Year View of Workplace Injuries & Fatalities in the U.S.

According to the U.S. Bureau of Labor Statistics (BLS), the number of workplace injuries has remained largely unchanged…