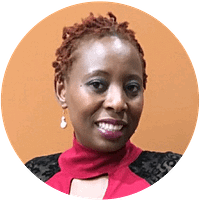 The 2022 SME Annual Conference & Expo, MINEXCHANGE, took place earlier this month in Salt Lake City, UT, featuring a wide variety of technical sessions and speakers combined with an expansive exhibit hall. According to Cyanco’s Director of Applied Technology, Roy Norcross, thousands of mining professionals from around the world were in attendance.

Roy and colleague Pamela Moyo, Sr. Application Specialist, were on hand to represent Cyanco in the technology session: A Novel Process to Convert Copper Cyanide to Copper Oxide.

The presentation, given by Pam, highlighted Cyanco’s collaboration on research to minimize the impact of cuprous cyanide (CuCN) in the gold circuit by converting it to copper oxide (CuO).

Pam credits industry consultant and co-author of the research, Steve Dixon, with the original concept.

“We worked with Steve to demonstrate that precipitated CuCN from the elution circuit can be converted to CuO using sodium hydroxide (NaOH) at ambient temperatures,” said Pam. “We’re still testing, but we know it can be done – the science works. From here, we will continue work to optimize the process and determine if the conversion of CuCN to CuO provides a viable commercial-scale option for getting copper out of customers’ circuits.”

Pam stated that commercial viability would result in cost savings and efficiencies – as well as ESG benefits such as the reduction of mine-site waste streams. “From both an economical and environmental viewpoint, this would be an advantageous, new way to process cyanide, while creating a copper byproduct that is easily handled and can be reused in other applications,” she said.

“This is another example of Cyanco supporting the industry with new ways to make mining smarter, easier and safer,” said Roy. “Hats off to Pam. Her work on copper conversion holds a great deal of promise for our customers – and we’re excited to see what the practical application of the research will bring.”

Q:  How did you get started on your professional journey?
PM:  I was born and raised in Zimbabwe. In school I was good at science. As I neared [high school] graduation and began thinking about a career, I attended an open house at the University of Zimbabwe. I was really intrigued by the microscopic images of metals they had on display. There was also a big advertisement on the school’s application form that said metallurgists would have no trouble finding a job coming out of university! That’s how I got started in this field. When I graduated, I held some junior metallurgist jobs, while lecturing at Bulawayo Polytechnic College. I moved to Canada, where I earned my MEng in Mining and Metallurgical Engineering from McGill University, while working for various companies

Q:  How did you end up at Cyanco?
PM:   I moved to the U.S. from Canada to work for Barrick in Nevada, where I spent eight colorful years as a Senior Metallurgist. From there, I moved on to become Chief Metallurgist at a new Nevada Copper project. COVID interrupted the project’s ramp up, bringing production on the process side to a halt. So, like many mine professionals at that time, I experienced a period of transition, which is when I connected with Cyanco and joined Roy’s Applied Technology Team.

Q:  Pam, you’re a female technologist in a traditionally male segment. What are your thoughts on diversity and gender equality in mining today?
PM:  When we visit mine sites in Nevada or Quebec, we find the make-up of their metallurgical groups to be at least 50% female, if not more. Employees in the labs are also mostly female. Quite often these women are daughters or granddaughters of miners who have gone to school to earn advanced technology degrees in order to become second or third generation mining professionals. From my perspective, mining has made great strides in creating a diverse and inclusive workforce.

Cyanco supports the mining industry’s next generation of engineers, technicians and manufacturing professionals through FIRST Robotics.